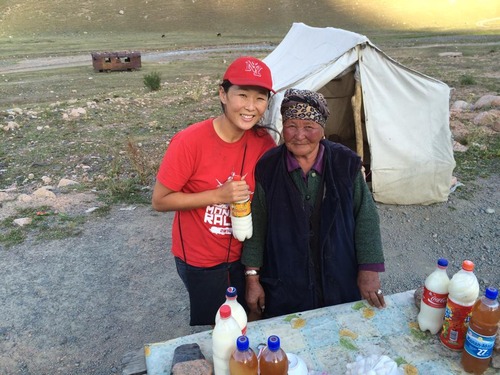 While driving the M-41 highway from Osh to Bishkek we visited a beautiful valley full of Kyrgyz nomads.

We stopped by a roadside stand where a Kyrgyz Grandma was sitting in fierce wind selling Kumis in recycled plastic bottles.

Her family yurt is only several hundred feet away down by the river where you can see her horses grazing. You can't get more "locally grown", "organic" and "fair trade" than this ;-)

So how does the the fermented mare's milk taste like? It's got a light smoked Gouda cheese taste to it, hint of saltiness with a bit sour and tart finish.

THANK YOU FOR YOUR DONATIONS for this mission, together we saved over 3.2 acres of rainforest in Peru through our charity Cool Earth ;-) 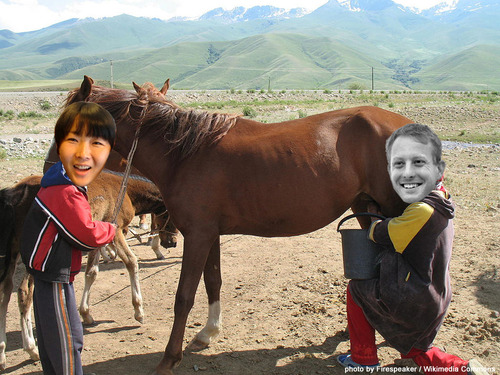 Let's see if we can find some locals and drink some of their homemade fermented mare's milk! Mongolians calls it "Airag", other parts of Central Asian countries called in "Kumis".

During fermentation, the lactose in mare's milk is converted into lactic acid, ethanol and carbon dioxide, and the milk becomes an accessible source of nutrition for people who are lactose intolerant.

Before fermentation, mare's milk has almost 40% more lactose than cow's milk. According to one modern source, "unfermented mare's milk is generally not drunk", because it is a strong laxative. Drinking six ounces (190 ml) a day would be enough to give a lactose-intolerant person severe intestinal symptoms.


A Youtube video of three of us toasting mare's milk to you in a Mongolian Ger!