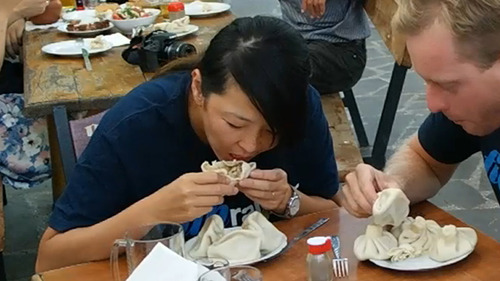 Mission Accomplished! For this mission we went to "Salobie"- a restaurant located in Mtskheta, Georgia famous for their Khinkali and Lobio Bean soup. Let's see which of us can eat the most Georgian soup dumplings in one minute!

THANK YOU for all your donations together we saved over 1.6 acres of rainforest in Peru through our charity Cool Earth!

Check out our other missions here:
https://mongol-rally.funraiser.us/ 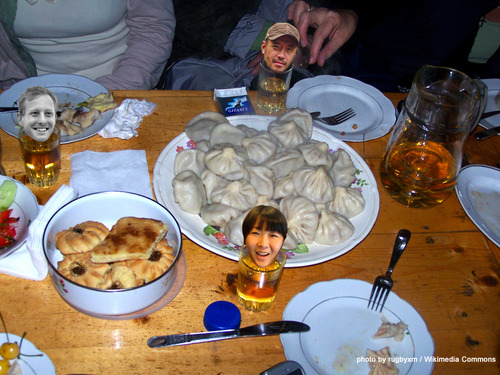 How many Georgian dumplings can we eat in 1 minutes? And who will win this challenge?

Will it be Hyun Young Jung, coming out of retirement, who ate a record breaking 7 dumplings at the infamous Flushing NY dumpling eating contest. Or Kenneth Tin Kin Hung, he may look like a feather weight, but can eat like Carnie Wilson at a all you can eat buffet, pre lap band surgery. And let’s not forget the 6’2” all American boy who has type 2 diabetes, I mean you can’t be more U.S.A than that!

Pledge to find out who will be reigning champ!

What is Khinkali Dumplings?

Khinkali (Georgian: ხინკალი) is a Georgian dumplinp which originated in the Georgian regions of Pshavi, Mtiuleti and Khevsureti. Khinkali is filled with various fillings, mostly with spiced meat (usually beef and pork in Georgia, beef in Azerbaijan and other Muslim-majority areas, and sometimes lamb), herbs (usually coriander), and onions. Mushrooms, potatoes, or cheese may be used in place of meat.


A Youtube video of three of us trying to eat as many Khinkali dumplings as possible.