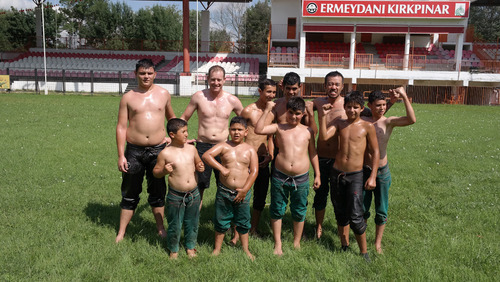 Mission Completed! For this FUNraiser mission we originally planned to simply oil wrestle in front of the Kırkpınar stadium in Edirne, Turkey.

When we arrived we met the super nice folks from AZ 81 SPOR KULÜBÜ (AZ 81 Sports Club). They invited us inside the stadium to wrestle with them! It is like playing baseball in the Yankee Stadium! FYI, both Graham and myself (Kenneth) have no experience in wrestling at all.

Then all of a sudden a TV crew from AHBR showed up and we were on Turkish television being interviewed!

A HUGE THANK YOU for AZ 81 SPOR KULÜBÜ in Edirne for giving us this tremendous experience! It is our utmost honor to be able to wrestle on the sacred field of Kırkpınar stadium.

Together with our pledgers' generous donations and our silly "elbow grease", we together save over 8.25 acres of rainforest in Peru! 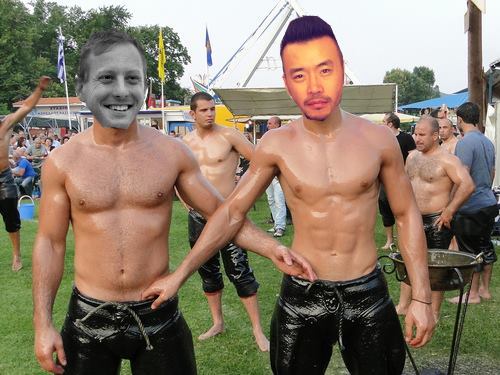 This Turkish national sport is so called because the wrestlers douse themselves with olive oil. The wrestlers, known as Pehlivan wear a type of hand-stitched lederhosen called a kisbet, which is traditionally made of water buffalo hide, and most recently has been made of calfskin.

Unlike Olympic wrestling, oil wrestling matches may be won by achieving an effective hold of the kisbet. Thus, the pehlivan aims to control his opponent by putting his arm through the latter's kisbet. To win by this move is called Paça Kazık, as shown in the picture above.


A Youtube video of Graham VS Kenneth wrestling in olive oil!